INTRODUCTION
Ready-mixed concrete, by far the most common form of concrete, accounts for more than half of all concrete consumption. Ready mixed refers to concrete that is batched for delivery from a central mixing plant instead of being mixed on the job site. Each batch of ready-mixed concrete is tailor-made according to the specifications of the contractor or concrete mix design and is delivered to the site in green or plastic condition, usually in the cylindrical trucks often known as “Transit mixers”.

Concrete constituents occupy a large space for storage at construction site. Further, the builder has to spend a lot of time and effort to source these materials and test their quality before use. Ready Mixed Concrete (RMC) suppliers take care to collect and store all these materials and supply the required quantity of concrete at the specified time and place so that construction can proceed smoothly. Metropolitan Cities are hard-pressed for Storage Space. Therefore, RMC greatly relieves the space problem.

The real advantage for the construction industry accrues from the quality of the concrete because of the expertise and experience of the Batching Plant QC Engineer. However, the quality of the structure made using RMC largely depends on close coordination between the supplier of RMC and the builder at the site at all stages starting from ordering concrete to discharging and placing of the concrete. Transit Mixers can drive directly onto the site and can mechanically control the positioning of the discharge chute without the help of contractor personnel.

HISTORY :
As early as 1909, concrete was prepared by a horse-drawn mixer that used paddles turned by the cart’s wheels to mix concrete en route to the jobsite. In 1916, Stephen Stepanian of Columbus, Ohio , developed a self-discharging motorized transit mixer that was the predecessor of the modern ready-mixed concrete truck. Development of improved ready-mixed concrete trucks was developed in the 1920s. During the 1940s, the availability of heavier trucks and better engines allowed mixing drum capacities to increase, which in turn allowed ready-mixed concrete producers to meet the high demand for concrete that developed as a result of World War II.
RMC – A STEP FORWARD AND IDEAL FOR MANY JOBS

The builder should specify the grade (strength) of concrete required for his structure. It is also necessary to specify the minimum cement content & maximum permissible water-cement ratio and the workability in terms of slump value. This will ensure that concrete will have required strength on attaining maturity, workable at the time of placing and will be durable. For special jobs, the type of cement or admixture to be used should also be specified.

RMC can be classified according to ingredients mixed in Concrete. These may be on the basis of Cementitous Material ie. Fly ash is a part of Cement or not and Admixture is used or not. Otherwise, there are two principal categories of ready mixed concrete.
1. DRY CONCRETE: All the ingredients are mixed in dry form without mixing water in it. All these materials are sent in rotating drum and measured water quantity is sent in separate Water container. The water is mixed at site when it reaches there.
2. GREEN CONCRETE: All the ingredients are mixed together including the measured water quantity at Concrete Batching Plant itself. They are sent in rotating drum or in transit mixture to the site of concreting.

The most important parameter is the time that gets elapsed from the instance of adding water to the placement of concrete. Normally, the concrete has to be placed in about 90 -120 minutes or before the rotating drum of transit mixer has made about 300 revolutions. Indian Standard 4926:2003 permits concrete to be discharged from the truck mixer within 120 minutes after loading. It also permits a longer period if suitable retarding admixtures are used or by deliberate chilling. 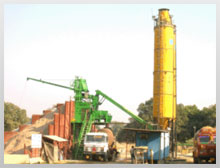 RMC is a specialized material in which the cement aggregates and other ingredients are weigh-batched at a plant in a central mixer or truck mixer, before delivery to the construction site in a condition ready for placing by the builder. Thus, `fresh’ concrete is manufactured in a plant away from the construction site and transported within the requisite journey time. The RMC supplier provides two services, firstly one of processing the materials for making fresh concrete and secondly, of transporting a product within a short time.
Sometimes Materials such as water and some varieties of admixtures can be transit-mixed (also known as Transit Mixture), that is they can be added to the concrete at the jobsite after it has been batched to ensure that the specified properties are attained before
placement. Here materials are batched at a central plant and are completely mixed in the Batching Plant or partially mixed in transit. Transit-mixing keeps the water separate from the cement and aggregates and allows the concrete to be mixed immediately before placement at the construction site (Dry Concrete). This method avoids the problems of premature hardening and slump loss that result from potential delays in transportation or placement of central-mixed concrete.

Additionally, transit-mixing allows concrete to be hauled to construction sites further away from the plant. There are several types of RMC plants varying in type of mixing and capacity of concrete production.
These plants are generally available in capacities varying from 15 cum/hour to 200 cum/hour. A typical RMC plant is shown here.

While ready mixed concrete can be delivered to the point of placement in a variety of ways, the overwhelming majority of it is brought to the construction site in truck-mounted, rotating drum mixers. Truck mixers have a revolving drum with the axis inclined to the horizontal. Inside the shell of the mixer drum are pair of blades or fins that wrap in a helical (spiral) configuration from the head to the opening of the drum. This configuration enables the concrete to mix when the drum spins in one direction and causes it to discharge when the direction is reversed.
To load, or charge, raw materials from a transit mix plant or centrally mixed concrete into the truck, the drum must be turned very fast in the charging direction.
After the concrete is loaded and mixed, it is normally hauled to the job site with the drum turning at a speed of less than 2 rpm. The maximum number of revolutions the drum may rotate before delivery is about 300.

Central-mixed concrete is completely mixed at the plant then transported in a truck or transit mixer or agitator truck. Freshly mixed concrete may be transported in a open dump truck if the jobsite is near the plant or very low slump is required like for Pavement Quality Concrete used in Road Construction. Slight agitation of the concrete during transit prevents segregation of the materials and reduces the amount of slump loss.
SITE PREPARATION:
A fully loaded transit mixer weighs approximately 25 Tons. Hence prior checking of good access to the site of discharge of concrete from transit mixture is essential. This will avoid problems of delay on the day of concreting.
QUALITY ASSURANCE: 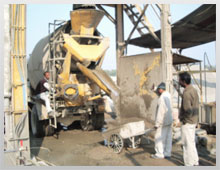 For this a sample of concrete must be taken out of Transit Mixture (as shown in figure) to measure the workability by taking the slump. Samples are also taken for determining actual compressive strength of concrete. Three cubes of size 150x150x150 are made on site of this concrete from every or alternate transit mixture depending upon the total quantity of concrete ordered. Samples should be taken from different parts of the load

Efficient use of RMC depends upon a rapid turnaround of truck mixers and proper facilities for rapid discharge and placing of concrete. With proper access and site facilities, the modern truck mixers can position it and discharge the full load in 15 to 30 minutes. They represent a potential delivery rate of nearly 30 m3 per hour. The concrete arrives with the ordered workability and hence no extra water should be added at the site. Concrete that does not arrive within the tolerance limit of ordered workability may be rejected or if permitted, it can be altered by mixing a small dose of Admixture, after judging the condition of concrete.
Ready-mixed concrete is often remixed once it arrives at the jobsite to ensure that the proper slump is obtained. However, concrete that has been remixed tends to set more rapidly than concrete mixed only once. The builder often handles the concrete with only a few manual laborers. Continuous handling methods such as mobile pump and conveyor system help in increasing the turnover. It is best to discharge the concrete from the truck mixture as close as possible to the place where it is required. Concrete can be discharged directly from the truck through chutes or it can be pumped by static or Mobile Pump as shown at the construction pouring point. 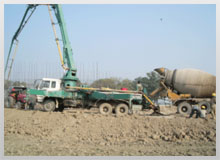